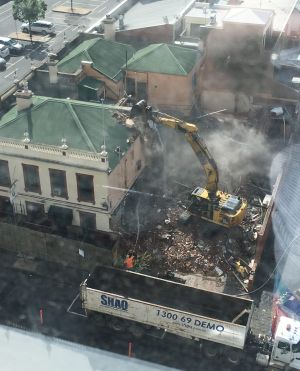 Over the weekend of 15th and the 16th October the heritage listed pub, first built in 1857 as the Carlton Inn, enlarged and embellished in the 1880s, and lately known as the Corkmans Irish Pub, was brazenly demolished by the new owner without any kind of a permit.

A number of heritage protected buildings in inner Melbourne have been demolished in the last 10 years without a demolition permit, but they were all subject to planning permits allowing a redevelopment, usually retaining only the facade -which was supposedly found to be ‘unstable’ during demolition, or demolished ‘accidentally’. This case is quite different as no development was proposed, and though there was a fire (labeled as ‘suspicious’) the weekend before, the pub wasn’t severely damaged. What’s more the demolition was carried out seemingly directly by the owners, without much in the way of safety procedures or warnings, and even after they had received a stop work notice issued by the Council.

The owners have been named as Stefce Kutlesovski and Raman Shaqiri, whose company 160 Leicester Pty Ltd, paid $4.76 mill for the pub in August 2015, $1.5 mill over the reserve.

The demolition has unleashed a storm of protest, with coverage on radio, The Age , The Guardian, ABC News and social media, and MHA President Tristan Davies has been quoted often; many of the messages from the public  are calling for all sorts of severe penalties for the owners.

The major penalty available is really a planning instrument – an enforcement order requiring the owner (or any subsequent owner) to rebuild the facade, or perhaps  more than the facade. This has been successfully pursued on 7 cases across inner Melbourne, though only three are well done reproductions (two others are very bad reproductions, and the others haven’t been built yet).  There is a change.org petition ‘Resurrect the Corkman Pub‘ calling for exactly this action, started by Melbourne University Law Students whose local pub has now been unceremoniously flattened.

Other penalties available however are not designed to apply any kind of heavy punishment on commercial owners for willfully destroying a part of our heritage. The maximum fine is merely for acting without a permit, and the highest that can be imposed is 1200 ‘penalty points’ (about $180,000). MHA is pleased to see that the Minister for Planning Richard Wynne has called this demolition a ‘complete outrage’ and will examine the possibilities for  higher penalties in the future for unlawful demolition of heritage buildings. Its also great to see the Lord Mayor calling this the “most brazen and wanton act of destructive vandalism I’ve seen in my time as mayor” in the Guardian (though we think the Palace is pretty much on par).

Melbourne Heritage Action looks forward to increased penalties specifically for willful heritage demolitions. Perhaps it should be a large proportion of the the value of the site, so that the fine would make development unviable – we need the best deterrent possible to ensure this never happens again.

We expect the City of Melbourne will serve the owners (not the already deregistered company) with an enforcement notice requiring a reconstruction of at least the facades, but perhaps they should be required to rebuild the building, or at least the 1857 corner section (about a quarter of the site), exactly as it was. The original bluestone that was part of the earlier construction is either on site still, or its location known, and should be reused, as well as any bricks that survive in a usable condition. This reconstruction should not wait until a redevelopment is approved, but happen straight away. It should also either be undertaken by a reputable firm at the owner’s expense, or under the strictest supervision to ensure it’s done properly.

We will also be writing to the City of Melbourne to encourage them to to prosecute for the maximum fine, and to ensure the pub is rebuilt as soon as possible. We encourage you to do the same by signing the petition.